A Sad Day for American Democracy 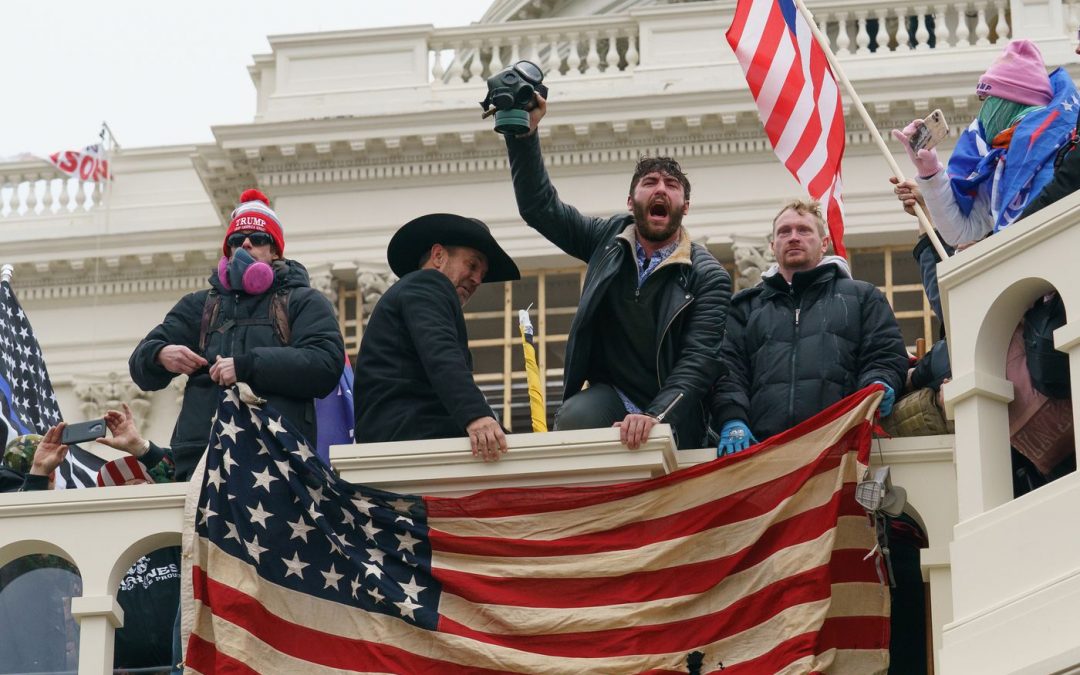 There are 5 instances in my life that I remember exactly where I was and what I was doing when they occurred–the Iran hostage crisis in 1979, the Challenger Space Shuttle Explosion in 1986, the fall of the Berlin Wall in 1989, the terrorist attacks on September 11, 2001, and now insurgents attempting to overturn American Democracy in 2021. On Wednesday, January 6th, 2021 I watched with horror the German and European News as I witnessed the attack on American Democracy last week as Trump supporters attempted to overtake the U.S. Capitol. For once I was grateful that my poor German prevented me from understanding most of the report but even with limited German, I managed to understand it when the reporters claimed it was “a sad day for American Democracy.” Looking at the photos flashing on the television I could not help but feel nauseous as I saw clips of shattered glass on the windows of the House Chambers, people scaling the wall of the Capitol, and a man running through the middle of the Capitol with a Confederate flag. In addition to feeling sad and horrified, I felt anger more than anything else. In the days leading up to Wednesday’s ceremonial certification of the Electoral College Votes declaring Biden the rightful victor of the 2020 election Trump had threatened for weeks that this day would come. These actions were not a surprise to anyone—that is anyone, but the people in charge of securing the Capitol. The questions people posed how did this happen?

In a rally immediately before the insurgents stormed the Capital, Trump encouraged his supporters to march to the capital and overtake it. These traitors planned to cause chaos to prevent Congressional Members from certifying the election results. The masses quickly overtook the Capital Building causing so much trouble Congressional Members and Aides were swept away into undisclosed safe places while these rioters stole a lectern from House Speaker Pelosi’s office, damaged Capital property, and spread feces spread across the walls. After several hours, the House and Senate Sergeant of Arms, the Capital Police and FINALLY the National Guard managed to secure the Capital. At the end of the hours of unrest, more than 50 people were arrested, and five people died. However, despite all of that, Congressional Members were determined to finish the task at hand, and they reconvened and certified the election for Joe Biden.

In the days that followed these events, there has been a lot of speculation as to how such an attack could be done so easily, and who is to blame. There are rumors circulating on social media that Congressional Members and Capital Police officers allowed the protesters into the building. There are also stories of capital police officers inside the capital posing with selfies with the rioters. Additionally, there is speculation that someone from the “inside “ provided the thugs with a map of the building so that key congressional leaders like Speaker Pelosi’s office could be found easily by outsiders. It will no doubt take the FBI, Secret Service, and other Federal Agencies many months to obtain all the answers to these questions, but if there is any truth to any of these allegations, the guilty parties must be prosecuted and held accountable to the fullest extent of the law. House Speaker Pelosi has already demanded the resignation of the House Sargent of Arms, and Senate Majority Leader Mitch McConnell has demanded the resignation of the Senate Sargent of Arms. These resignations are the 1st of what will hopefully a range of prosecutions.

Despite the fact that Trump will leave office on January 20, Democratic Leaders have taken actions to remove him from office as soon as possible rather than to wait until Biden’s inauguration. Speaker Pelosi and Senate Minority Leader Chuck Schumer have demanded Trump be removed from office either by his own resignation, evoking the 25th Amendment, or impeachment. Since Trump has already stated he would not resign, Congressional Leaders believed evoking the 25th Amendment would be the easiest and fastest way to remove him from power. The problem with this solution is it requires the cooperation of Vice President Pence and a majority of the cabinet to agree to such an action. Despite Trump’s protesters demanding for Pence’s assassination, Pence appears to be unwilling to evoke the 25th—and has reportedly refused to take Pelosi or Schumer’s calls. Moreover, 2 key cabinet members –Education Secretary Betsy DeVos and Transportation Secretary Elaine Chao resigned following Wednesday’s events. However, if they expect anyone to believe their resignations resulted in a conscience, they are fooling nobody. The time to resign out of integrity was months—if not years ago. More than likely, these resignations resulted because these people did not have the conviction to vote in favor of evoking the 25th Amendment—instead they took the cowardly way out and resigned.

In anticipation of the 25th Amendment not being evoked, House Members have drafted Articles of Impeachment and are reportedly going to be presented later next week. Meanwhile, outgoing Senate Majority Leader Mitch McConnell is further enabling trump’s behavior by promising that the Senate will not even entertain the trial until 1:00, on January 20 (an hour after Biden is formally sworn in) Other Republicans are begging the Democrats not to move forward with the impeachment arguing it would further divide the nation. Make no mistake about it; Republicans have no desire in unity the country, only in securing their own livelihood. Otherwise they would not have continued to enable and support Trump’s rhetoric for the last several weeks about the legitimacy of the election. In fact, even after the events of Wednesday, 8 Republican Senators and more than 100 Republican Congress Members still wanted to challenge the results of the 2020 election.

Given the fact that it is only 10 before Biden’s inauguration, many question why even bother to impeach Trump. Why not just let him ride out the rest of his presidency? If he is impeached he loses perks such as his 400,000 annual salary, 1 million a year travel budget, secret service protection, and he will be unable to run for office again in 2024. While these reasons are certainly important, I think the biggest reason to move forward is to continue to hold him and his enablers accountable. Looking the other way and ignoring how Trump attempted to overturn the democratic government with no consequences gives others the idea that such behavior is acceptable. I am a historian, and as such, I always look at how things will look in the history books, and I think for future generations it is important that people realize who was on the right side of history on this issue. The Democrats who fought with everything they had—despite the obstacles of unwilling accomplices and enablers of Trump will be seen as the traitors—the destroyers of American Democracy.
If the Senate either stalls the impeachment hearing until after Biden is inaugurated or they once again refuse to do their job and acquits Trump again or the Senate refuses to do their job and acquits Trump from seditious acts, once he leaves office he will no longer be exempt from prosecution. Although a difficult political decision, the Biden administration justice department owes it to the sake of American Democracy to pursue criminal charges against Trump. Both inciting a riot and participating in sedition are federal offences and should be pursued accordingly.

Following the seditious acts last week, all social media platforms: Facebook, Instagram, and Twitter finally permanently suspended Trump’s account, but that was too little too late. He had been spewing his rhetoric for years, it is a necessary and grateful step, but it would have been more effective if it had been done years. While Trump was no doubt the leader in all of this, he could not have done these actions successfully without the help of loyal followers such as Senator Ted Cruz and Senator Josh Hawley. There are calls for their resignations, and if they fail to resign, they too should be expelled from their Senate seats. They recent actions and words indicate that they have failed to take their oaths to protect the U.S. constitution seriously, and therefore do not deserve to serve as members of the U.S. Senate.

Perhaps even more alarming than Senator Cruz and Senator Hawley’s actions to overturn the election, were the hateful and disrespectful actions of two freshman members of Congress. Newly elected congressman Derrick Evans from West Virginia was seen as one of the insurgents destroying Capitol property, who has sense resigned and been arrested. Then Congress woman Mary Miller from Illinois who quoted Hitler in a recent speech. She has since apologized for her words, but I believe she too should be expelled from Congress who propagate hate speech and behavior.

Suspending Trump’s Twitter account is an appropriate step, but Fox News played a major role in these actions as well .As a proponent of free speech, I do not normally encourage censorship of people with whom I disagree, but the propaganda spewed by Fox News was not simply free speech, but rather hate speech, and seditious and damaging information. It would be in the Biden’s best interest to consider revoking Fox’s FCC license until such time they can report honest/ and legitimate news and information.
There are many people who wonder if there is a Republican Party after Trump While I make my Democratic and liberal leaning no secret; I also understand the benefit of having multiple—even conflicting ideas and policies. It might be a good thing for the current Republican (or the party of Trump) to dismantle. Let the ideas of Republicans who have formed the Lincoln Project who believe in the traditional Republican values of: free trade, balanced budgets, and limited government regroup and form another party. One thing that is certain is the Republican Party as it currently stands that has enabled and supported Trump the past several years will be detrimental to American democracy.

Europeans are horrified and saddened by what they have seen happen to American Democracy over the past four years. Our Democracy dodged a bullet with the failed coup attack last week. However, as Germans will very quickly point out, Hitler led an unsuccessful coup attempt in 1923, only to gain power in 1933. Unless Republicans and Democrats both understand how dangerously close we were /are to losing our democracy, the United States could see a repeat of what happened in Europe. Remember the United States already underwent one Civil War because of race relations, and the events of the last few years illustrate those wounds still have not healed. If we are not careful, and continue to ignore the warnings, we may not be so lucky with the next coup attempt.