January 2019, Munich held a sister march to the Women’s Marches across the United States 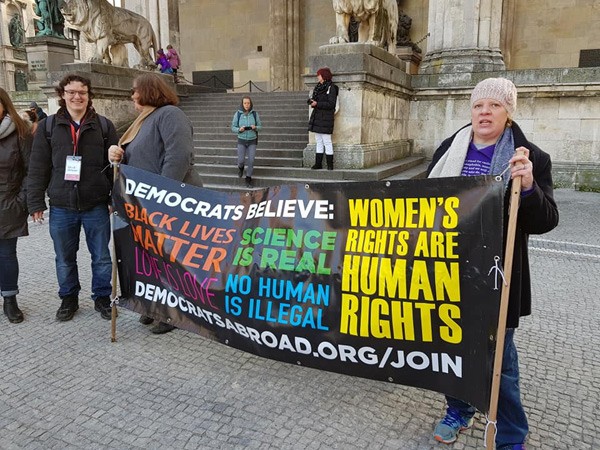 Many of my activist friends gave me a rough time and accused me of “giving up” when I decided to move to Germany following Trump’s unfortunate 2016 victory. However, I promised all my friends that as long as I continued to hold a U.S. Passport I would fight against the same injustices I always had—I would just do it from the other side of the Atlantic. One thing we can definitely say about Trump is that he and his administration has certainly kept political activists like myself busy.

True to my word, I have helped to organize and have attended various activities with the Democrats Abroad /Germany Chapter.

After hearing about the appalling zero tolerance family separation policy, I helped to organize and I spoke at a March/protest at a sister “Families Belong Together” sister rally in Munich in June 2018. During my speech I read a list of demands that demanded of the current administration`s zero tolerance policy toward refugees. Included in those demands was: that every single refugee was to receive the same due process as guaranteed by the U.S. Constitution, ceasing forcing minor children psychiatric medication without parental consent immediately, and the immediate resignation of Homeland Secretary Kirstjen Nielson

In September 2018 I served on a panel discussion at the Democrats Abroad Women`s Caucus meeting in Berlin. During this day seminar, 2 other women and myself discussed the challenges the current administration created on women. We talked about the importance of finally passing the Equal Rights Amendment, the disgust and rage we felt at the misogyny of the current administration and the farce of the Supreme Court investigation against the sexual abuse allegations of Supreme Court Nominee Brett Kavanaugh, and of course we expressed our discontent about the ongoing and additional attacks on women’s health—particularly with respect to reproductive health.

The last weeks of October leading up to the 2018 midterm election were some of the most turbulent times in modern history. Multiple “enemies” of Trump including from former President Obama, Secretary Clinton, actor Robert Deniro and CNN offices received pipe bombs in the mail, which thankfully had not gone off, and nobody had been hurt. While Americans were trying to make sense of those attacks, a Pittsburgh Synagogue was attacked and with 11 deaths, the American Jewish community experienced the worst Anti-Semitic attack ever on U.S. soil. As if that were not bad enough, 2 African Americans were killed in a grocery store in Kentucky in another apparent hate crime incident. As Americans, our emotions were raw, and we knew for therapy we needed to come together to mourn these losses and express our outrage. Then came the midterm elections, and the Democrats managed to take back control over the House. On the Friday following the midterm election, we held a candle night vigil. We held a moment of silence for those impacted by the pipe bomb, and the lives lost in Pittsburgh and Kentucky. We also celebrated the historic victories of women and minorities into elected offices across the United States at both the state and federal levels including the first 2 Muslim American women elected to Congress, and the first 2 Native American Women.

In January 2019, Munich held a sister march to the Women`s Marches across the United States. A crowd of approximately 250 people joined us as we marched through the streets of Munich demanding the passage of the Equal Rights Amendment and demanding for justice for sexual assault victims—especially since the Violence of Women Act had expired because of the current government shutdown.