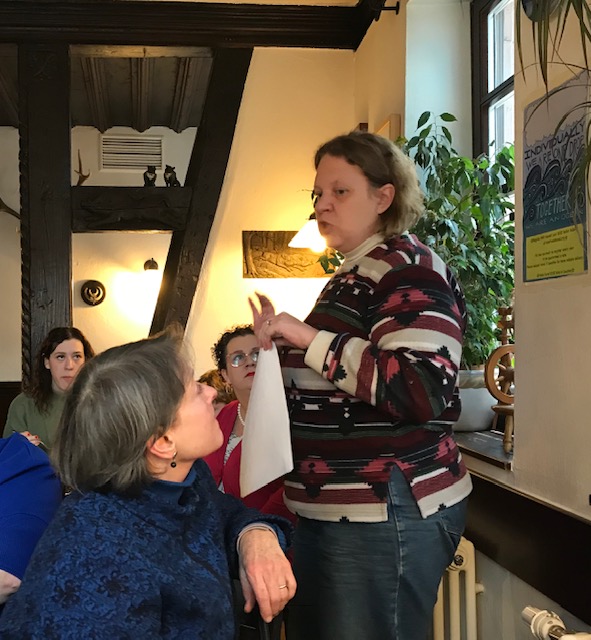 Between my speaking engagements for my book and my other political events, the first weeks of 2020 have proven to be very busy for me.   Brian and I spent the week between Christmas and New Years in Lapland, Finland for an amazing vacation north of the Arctic Circle. We returned on January 3, and I had a little over a week to unwind before work resumed and I was on the road again this time to speak at the Democrats Abroad Münster monthly meeting.  On January 10th, I boarded the train in Landshut for the 7.5 hour trip to the North Rhine-Westphalia, region of Germany, where I would spend the next twenty four hours in Münster, also the bike capital of the world.

After 3 train transfers, I managed to arrive at my final destination only 20 minutes late.  If you are familiar with Deutsch Bahn and the train system in Germany, you will understand that was quite an accomplishment.  Fortunately, a friend of mine had agreed to host me so I did not have to stay in a hotel. My friend met me at the train station, and although it was only 4. 30, I was extremely hungry.  As it turns out, there was a group of young people in the café train car that seemed to think it was Oktoberfest, so with their drinking, partying, and disorderly conduct I was unable to get anything to eat.  Luckily, my friend agreed to an early dinner, so we stopped at her house dropped off my things, and off we went. It was dark, so it was hard to see too much, but she did her best to show me the Rathaus, the Church, and other famous buildings in the cities.  We had a nice dinner and we returned to her home where we spent the rest of the evening talking about the upcoming democratic primary election, the realities of the current political system and how relevant my book was given the current political climate. Trump had just managed to avoid a war with Iran and he was upset that other allied leaders were not supporting him.  I argued in my book that trust among allied leaders was paramount and without that trust, the world was a dangerous place.

The next morning I was the guest speaker at their monthly meeting.  25 people came to hear me speak. However, the most flattering thing—my friend’s husband is German, and he normally stays out of political meetings.  However, during breakfast and he asked me about my book, he offered to give us a ride to the meeting, and he actually stayed for the meeting because he was interested in the topic and wanted to hear what I had to say. The group was extremely supportive and attentive.  They asked insightful questions about my research, and where we go from here given today’s political climate. The audience appreciated my knowledge, and thoroughness and expertise, and more importantly they offered to help with future speaking engagements. Following the meeting, I had 3 hours before my train to return home, so one of the participants gave me a day tour of Münster.

Over the course of this process, on more than one occasion I have wanted to throw in the towel and give up because I have become so frustrated. Nevertheless, after each of these book discussions I grow more and more determined than ever to publish my book. I get so excited presenting to people on something that is so important to me. I watch the participants listen eagerly to everything I saw and laugh and even challenge me.  The interaction reinforces to me that this work was not done in vain. With every presentation I give, I grow more comfortable with both my audience and my subject material, and I become more determined than ever to ensure this book finds a publisher. 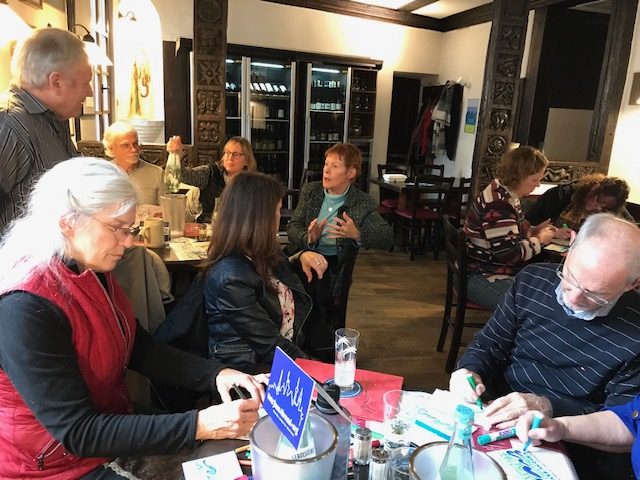 On Friday afternoon (February 7th) I headed to what appeared my 2nd home—the train station.  I was off this time to Kaiserlautern, Germany for another book presentation to the Democrats Abroad Chapter there. Kaiserlautern is city of approximately 100,000 people, and another 45,000 NATO military personal live in the region.  As such, the area comprises the largest area of Americans outside of the United States and contribute approximately US$1 billion annually to the local economy.

Again luck was on my side, because despite having 3 train transfers for the 6 hour train ride, every single train was on time, and I actually arrived to my final destination on time.  In fact, I had time to take a cab to my hotel and check in with time to spare before I meet my friend for dinner. The chapter chair of the group (and my host for the weekend) took me to dinner to a charming Italian restaurant.  The restaurant was nice, and the food was excellent, but the service was very slow. Luckily, it gave me an opportunity to talk to my friend—she and I really only talk at DA events, so this was the first time I really got to know her.  It was a rather interesting dinner—my friend noticed that her neighbor (whom she did not like) was also at the restaurant. My friend asked me if I spoke French, and when I answered “oui” she began to speak French to me. She told me that she did not like her neighbor because she was rude and a nosey, so we needed to speak in French so we would not be understood.  Only in Europe….

It was well after 10:00 when I finally returned to my hotel room, I called Brian briefly to check in, and then I made the mistake of reading the news on the internet. I read that 3 people directly (and indirectly) involved in testifying against Trump in the impeachment hearings had been fired.  I was both so angry and upset that I actually had trouble sleeping. I tossed and turned all night I was so upset at what had become of my country.

I woke up about 7:30 and ate breakfast and spent the morning getting ready for my presentation. Since the meeting did not begin until 1:30, I spent the rest of the morning wandering around and exploring the new city. One of the benefits of these book presentations besides getting to meet new people is exploring new places.

When I arrived for the meeting, the host of the meeting told me that they expected a good turn out—10 people had RSVP’ed (and it was uncommon for people to even RSVP) and in the end 18 people came. Again, the group was responsive, encouraging, and receptive.  With each presentation I grow more and more confident and have more fun at educating people about a topic which I have dedicated so much time and energy to. More than anything I want my audience to appreciate the work and the subject matter as much as I do, and when I have people disappointed that they cannot buy the book on the spot, I know I have accomplished my task.

I managed to tie my talk in with the events of the week.  Earlier that week, Trump presented conservative radio talk show host Rush Limbaugh with the presidential medal of freedom award.  A gesture many (myself included) thought it was a slap in the face and outrageous to the meaning of the award. When I talked about the relationship between Merkel and Obama, I always talk about Obama presented Merkel with that prestigious award, and today was no exception.  “Back when the Medal of Freedom Award actually meant something, President Obama bestowed that honor upon Merkel” I told my audience.

The week leading up to this presentation had been a disappointing and discouraging one. Still not having heard anything from an agent and/or publicist, earlier that week I followed up with my publicist.  She was unimpressed with my lunch/dinner meetings that I had conducted over Germany and told me she would never waste an agent’s time advocating for me with such dismal numbers of participants. It was extremely disheartening and discouraging nonetheless.  Were it not for the fact that I had already booked my train ticket and hotel and had promised to speak, I might have been inclined to back out of the engagement. Nevertheless, I knew that I had felt discouraged before and these events actually reenergized me, so I vowed I would go and see how things went.  After the presentation, I felt more optimistic about my work then I ever had, and more determined than ever to ensure the book finds a publisher, and if that means self-publishing I am going to do so. This book is too important and I enjoy it too much for the world not to see it.