A Lesson in Democracy 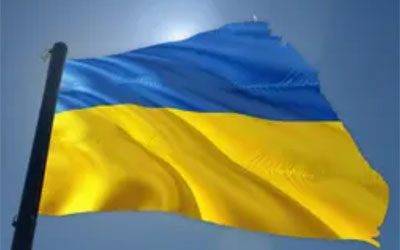 Russian President Vladimir Putin had had his sights on Ukraine for several years before he initiated an unprovoked attack against the independent, democratic nation on February 24, 2022. In the months leading to the invasion, Putin and his allies had accused the Ukrainian people of “genocide” against native Russians and ethnic Russian speakers in the Donbas in order to justify “the special military operation.”1 Additionally, and perhaps more importantly, Putin hoped to demilitarize Ukraine in order to prevent them from joining NATO– which was Putin’s ultimate goal. When he had envisioned embarking on a military operation against Ukraine, he over amplified his military capability while underestimating both the spirit of the Ukrainian people and the unitedness of the western world in their support toward Ukraine. Instead of taking control of Kiev in a matter of days as Putin had originally anticipated, five months the war continues with neither side showing any willingness to surrender. Despite the recent gains the Russian army has made, the fight the Ukrainian people have put forward to protect their sovereignty is a lesson to the rest on the fragility of democracy and the importance of fighting for it.

Putin, a former KGB officer during the Cold War stated in a 2005 speech that he believed the fall of the Soviet Union in 1991 was the “greatest geopolitical catastrophe” of the twentieth century. 2 While Ukraine had been under Russian control during the Cold War, it became a sovereign nation after the fall of the Soviet Union in 1991. However, Putin had never accepted that Ukraine no longer belonged to Russia, and he spent the years since the end of the Cold War looking for an opportunity to reclaim Ukraine for Russia, and in 2014 he found his chance. The recent political turmoil in Ukraine began in the winter of 2014 after the Ukrainian president Viktor Yanukovych had been ousted which resulted in mass demonstrations against the new Ukrainian government. The Russian army used this unrest among the Ukrainians to capture strategically important sites across Crimea which led to a series of domino events that resulted in Crimea’s declaration of independence on March 16, 2014, and Russia formally incorporating Crimea as part of Russia on March 18, 2014. 3

Russia’s illegal annexation of Crimea violated international law, and many world leaders and organizations spoke out publicly against its actions. In fact, the United Nations General Assembly adopted a resolution affirming the “territorial integrity of Ukraine within its internationally recognized borders.” 4 Additionally, leaders of western democracies united to penalize Putin in multiple ways with (then) German Chancellor Angela Merkel leading the way. The German Chancellor knew that Putin had an” almost desperate quest to be recognized as a great statesman by an equally great power.” 5 Due to his desire to be accepted by other world leaders, hosting the prestigious G8 summit in Russia (G8 or Group of Eight, a prestigious informal group of the world’s leading industrial nations) was extremely important to him. Merkel understood this, and she in accordance with the other G7 leaders told Putin that until Russia complied with international law, the G8 summit would be held in Brussels rather than Russia, and Russia would be formally expelled from the G8. 6 Much to the dismay of the members, Russian foreign minister Sergei Lavrov viewed the expulsion as invalid since, “one could not be expelled from the G8 since it was an informal club without official membership anyway.” 7

To the annoyance of the other world leaders, Putin did not return Crimea after they forced him out of the G8, so they turned to economic sanctions which from the very beginning negatively impacted the Russian economy. According to a joint press conference between U.S. President Barack Obama and Merkel on May 2, 2014, Obama acknowledged, “The ruble has fallen to near all-time lows, Russian stocks this year have dropped sharply, and Russia has slipped into a recession…. Russia’s credit rating has been downgraded to just above ‘junk’ status. “8

Despite the negative impact the sanctions created on the Russian economy, Putin refused to return the annexed territory, and he never stopped being resentful of being ousted from the G8. In fact, in 2018 the Russian President attempted to use his influence with the new U.S. President Donald Trump to manipulate the other world leaders and convince them that Russia should be readmitted to the G8. Despite Putin and Trump’s best attempts, the remaining G7 leaders held firm to their principles and refuse to reinstate Russia into the G7. Ukraine went on and attempted to function as a democratic institution with the remaining portion of the country.

In the meantime, despite of the territorial loss Ukraine faced at the hands of Putin in 2014, the remaining part of Ukraine attempted to improve its image around the world as a functioning democracy, and advocate for NATO membership. In 2019 the Ukrainian people elected political outsider Volodymyr Zelensky to serve as the nation’s sixth president to lead the country. The comedian/actor turned politician positioned himself as an anti-corruption and anti-establishment candidate and successfully managed to secure 73.23 percent of the vote to defeat incumbent president Poroshenko.9 In spite of his overwhelming victory in 2019, in the months which followed, the inexperienced president faced dismal approval ratings which seemed to indicate that his citizens questioned his leadership skills. In fact, in December 2021—only two months before Putin’s invasion, only 31% of Ukrainian citizens approved of the job Zelensky was doing. 10 In the months before the invasion when Russian troops began to surround the Ukrainian border and with intelligence reports from military specialists confirming that a full-fledged invasion was eminent, people around the world questioned whether Zelensky were up to handling the task. In fact, the U.S. government had offered to help Zelensky, and his family escape the country to safety. However, to both surprise and admiration of the world, the Ukrainian president boldly turned down the U.S.’s offer when he stated, “I need ammunition, not a ride”11 To which he received accolades from across the global, and astonishing approval rating of 90% from his own people. 12

Despite two reported assassination attempts in the early weeks of the war, the Ukrainian politician demonstrated not only to his citizens, but the world what true leadership looked like. Often speaking in the middle of the street on social media Zelensky addressed his citizens daily with updates on the current status of the war. Speaking eloquently and emphatically via video conferences before the U.S. Congress, the Canadian and British Parliaments, French Parliament, and the German Bundestag, and other nations, the Ukrainian leader pleaded for economic, humanitarian, and military aid. In his appeals, Zelensky reminded people that the Ukrainians were fighting for democracy for everyone—if Putin had the audacity to provoke a war on an independent, democratic country, nothing would stop him from going after other countries if he is successful in Ukraine, Zelensky argued. Following their president’s lead, the Ukrainian people have been putting up an incredible fight against unfavorable odds against Russian forces. In recent months, the news has been filled with stories such as Ukrainians blowing up bridges and sacrificing themselves before allowing Russian troops to advance.13

Following the invasion, western countries issued a wide range of sanctions to destroy the Russian economy and punish Putin and his closest allies for their actions. Individuals such as Putin him and his daughters, businesses, banks, imports, exports, bank transfers, and monetary exchanges have all been targets of these sanctions. Additionally, major Russian banks were cut off from SWIFT, the global messaging network for international payments. At the same time, a number of major multinational companies including General Motors, Apple, IKEA, and ExxonMobil acted like international law enforcers and also applied sanctions against Russia as well. More significantly, historically neutral countries such as Singapore and Switzerland also agreed to sanctions as well. 15

In a historic move, Olaf Scholz, the new chancellor of Germany suspended the Nord Stream 2 pipeline and promised a new policy of energy independence from Russia. In addition, for the first time since World War II Germany provided arms shipments to Ukraine, and increased their defense spending by approximately $100 billion, by some estimates making it the third largest military spender in the world.16

. Russia’s attack on Ukraine has resulted in the largest military operation on European soil since World War II, but because of a combination of efforts from the Ukrainian leaders, the resiliency and determination of the Ukrainian people and the united front and assistance of western nations Ukraine has managed to hold their own. Nevertheless, in recent weeks the tide appears to be turning and Russia has managed to take control over Donetsk and Luhansk regions, and the Kremlin forces are closing in Ukraine’ last major foothold in Luhansk, in the Lysychank region17 Additionally, Russian missiles recently struck the northeastern city of Kharkiv and Mykolayiv on the Black Sea.18 Regardless of these setbacks, Russia still has not managed to take control over the capital of Kiev, and Zelensky remains in power. How or when the war ends, world leaders all agree is up to the Ukrainian people. Allied nations have promised to remain supportive of Ukraine as long as the war continues, but the longer the war lasts, the higher gas s and inflation results, the more inpatient average citizens will be for the war to end. We can only hope that world leaders honor their word and continue to support Ukraine. One of the reasons Putin engaged in this war was to prevent Ukraine from joining NATO. However, one of the consequences of this war is that both Sweden and Finland (historically neutral countries) have applied for NATO membership—the reverse of what Putin had wanted to happen. Ukraine has also applied for membership into the EU, and while it usually takes years for nations to receive admittance into the EU, the actions of the Ukrainian people and leadership clearly illustrate that can defend the principles and philosophies of democratic countries and should be given serious consideration. However, the war ends, Merkel summed up nicely when she stated, “Freedom is indivisible. Each and every one has the same right to freedom, be it in North Africa, or Belarus…We see that living in freedom and defending freedom are two sides of one and the same again for the precious gift of freedom doesn’t come naturally, but has to be fought for, nurtured, and defended time and time again.” 19Hopefully Putin’s actions and the brave fight of the Ukrainian people have taught the rest of the world that freedom is something that cannot be taken for granted.