Let’s Talk About Why Walls Are A Bad Idea 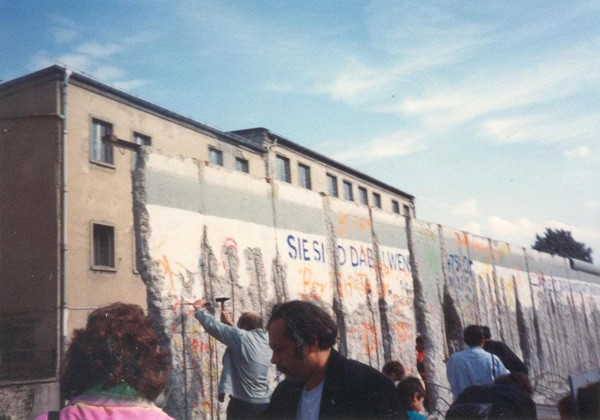 The Great Wall of China, the Berlin Wall, and now Trump’s wall across the southern border across the United States dividing it between the southern and central American countries. Since I live in Germany, I am going to talk about why walls are ineffective from Germany`s perspective. Now the construction of the Berlin Wall and Trump’s wall are for different reasons, (more on that in a minute) comparing the two is not exactly like comparing apples to apples. Nevertheless, in both instances people/families/nations were divided from friend, families, and country members by a large concrete barrier. Hardly a symbol of freedom or democracy.

The Berlin Wall or to German’s the “Berliner Mauer” was constructed by the Soviet Union in August 1961 in order to keep East Germans from fleeing to a freer more economically stable West Berlin. Prior to the completion of the wall, Berliners could cross the border easily to work, to attend cultural events or to visit friends and family. However, little did Germans know that during the night of August 12-13 while they slept telephone wires between East and West Berlin were cut, railroad lines were blocked, and construction crews dug holes to put in concrete posts and strung barbed wire across the border between East and West Berlin.

Can you imagine how it must have felt to be someone who happened to live on the West side who had opted to spend the evening in East Berlin with a lifelong friend—only to find that a wall forced you from escaping to everything that was new and familiar to you including your home, your job, your family, and your freedom? Conversely, can you imagine being someone who lived in East Berlin who had had the freedom to visit friends, cultural events in West Berlin suddenly ripped away from you? If there ever was a moment to teach people not to take their freedom, their friends or family for granted, that would be it. How hard would it have been waving goodbye to your dog or the neighbor and never knowing if and when you would ever be able to see them again because the two sides are separated by a concrete barrier?

The total length of the Berlin Wall was 91 miles and it cut through the center of Berlin as well as wrapping around West Berlin, entirely shutting it off from the rest of East Germany. The temporary wall that had been built on the evening of August 12-13 was quickly replaced on August 15th with a sturdier, more permanent structure and topped with barbed wire. In 1965 the Wall underwent another transformation which consisted of a concrete wall supported by steel girders. Between 1975-1980 the Wall went through the fourth transformation of its 28 year history. The structure consisted of 12 feet high and 4 feet wide concrete slabs with pipe running across the top to prevent people from scaling it. The Wall finally tumbled with the fall of Communism in November 1989, but before that happened, the government added additional securities such as minefields, anti-vehicle trenches, electric fences, 302 watchtowers, 20 bunkers, minefields, a 300 foot No Man`s Land and an additional wall. The grounds were also patrolled by soldiers and guard dogs, and a raked ground that showed footprints.

Over the 28 years the wall remained, approximately 5,000 safely crossed to the West German side, with between 190-230  people dying in the process.

As I mentioned in the beginning of this post the reasons for building the Berlin Wall and Trump’s desire to build his border wall are very different. The Soviet government constructed the Berlin Wall in a desperate attempt to keep its own citizens from moving to more democratic freer society with better economic opportunities. The East German government wanted to CONTROL its own citizens by denying them access to the rest of the world, and locked its own people behind a concrete barrier to achieve this goal. The Wall came crashing down as a result of a collapsing communist government and failing economy. It took 28 years, but the Wall collapsed, and when it did, its collapse was celebrated across the world. I was 16 years old on that dark, cold, fall evening in Michigan. I remember watching the news clips from my mom’s house and cheering as if I were right there next to those people who were finally free. While the Soviet government built the Berlin Wall to keep its citizens as prisoners within their own country and refused to allow them to leave, Trump wants to build a wall to prevent non citizens from entering into the American borders.

Trump’s primary campaign promise and pet project has been to build a beautiful concrete wall from sea to shining sea across the southern border of the United States between the U.S. and Mexico. Even if one puts aside the effectiveness and costs associated with such a wall, there are a million additional moral, practical, and even legal arguments against building such a structure. Nevertheless, Trump and his supporters swear up and down that such a barrier is the only way to keep Americans safe from gangs, drugs, and other illegal actions that people from southern nations bring with them.

While both Democrats and Republicans support better border security and a need to reform immigration policies, but most (including American citizens and Republican lawmakers) believe the wall is an ineffective solution to a complex problem.

Initially, Trump promised the American people that Mexico would pay for such a wall. When it became apparently clear early in his presidency that Mexico had no intention on paying for this wall, Trump turned to the American Congress for funding. Even in the first 2 years of his presidency with a Republican controlled House and Senate, he could not secure funding for the wall, which illustrates the point that he and his supporters are the only one who support Trump’s precious wall.

Over the months , the definition of the wall changed from a wall to a barrier to even a “peach”. Additionally, the construction materials changed from concrete to steel to…. Then of course the length and practicality of the wall. Experts argue that there are areas of the border who already have barriers/fences so such a fence is unnecessary. Others argue that land dispute over private property will tie the case up in the courts for many years. Private landholders will be forced to sell their land, wildlife will be impacted, and even a butterfly sanctuary and an 150 year old church will be impacted by building of this wall. Then of course the cost of the wall became a particular point of contention, when the Democrats refused to give the president the 5 billion dollars he demanded for a wall to separate the United States from Mexico. The Democrats DO NOT, by and large support open barriers and have no issue with providing funding for increased border security such as fixing barriers already in place and investing in technology such as drones. However, they firmly believed the wall was immoral and ineffective and refused to fund it. As a result of this impasse, Trump refused to sign the budget, which resulted in a partial government shut down. Thanks to Trump’s temper tantrum over an ineffective, and racist wall, over a million government employees and contractors missed 2 PAYCHECKS and went 35 days without pay.

After 35 days, even Trump realized the political and economic disaster the shutdown had created, so he  signed a temporarily 3 week budget which would reopen the government until February 15th, 2019.

Members of both houses worked diligently to come up with a bipartisan plan to prevent another government shutdown. In the final version, the conference committee tasked with reaching a compromise released a deal that provides  $1.375 billion for 55 new miles of physical barriers along the southwest border. Trump begrudgingly signed the budget bill because he realized another government shutdown would be political suicide. However, he was still pouting that there was not enough funding for his wall, so instead, he took actions his advisors had begged him not to do, he declared a state of emergency. He figured with a declared a state of emergency he could bypass Congress support, and obtain the necessary funding from other resources to pay for the southern border wall.

The Soviet Union built a wall in Berlin in order to keep its own citizens hostage. Families, friends, country members were separated from their parents, their spouses, siblings, and their own culture and way of life for 28 years because of a concrete wall. Citizens were shot and killed for attempting to escape to the side of freedom. People had hoped that when the Berlin Wall had come crumbing down and the Cold War ended, governments would stop placing physical restrictions and concrete barriers would also end.

America was founded by people who fled economic hardships and religious persecution. Building the wall is not only expensive, amoral, ineffective, but it is hypocritical. Building such a wall violates the principles upon which the United States of America was founded. Separating children from their parents and placing them in cages without giving them their due process is not only inhuman it is un-American.

Nobody is arguing for open borders. We are advocating for sane, and effective immigration reform. Use the money that is being spent on detention centers and building the wall to establish stronger diplomatic ties with key foreign leaders in the country’s with the most serious problems. Nobody wants to leave their home country if they believe conditions can become tolerable, and they won’t if they are not afraid for their lives. Work with humanitarian groups to fight gangs and drugs. Use the money building bridges not walls. We are no longer in the Cold War. We should not restrict people’s mobility with a wall on either side—either to prevent them from entering or from leaving. Let People Be Free.