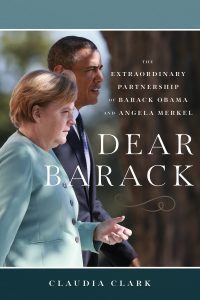 Dear Barack: The Extraordinary Partnership of Barack Obama and Angela Merkel by Claudia Clark is a wonderful book that deftly explores the fascinating, somewhat enigmatic relationship between two powerful leaders: Barrack Obama and Angela Merkel. The author is a social activist who moved to Germany in 2017, and having witnessed Donald Trump’s first meeting with German Chancellor Merkel, she noted that it couldn’t have been more different from encounters with Charismatic Barrack Obama. This book explores the relationship between Obama and Merkel, allowing readers to understand the core of their political alliance and partnership, their personalities, leadership styles, and political philosophies while uncovering interesting biographical moments that augment the dazzling portrait of their relationship.
Claudia Clark’s book is extensively researched and it captures important historical moments in American-German relations. In this narrative, readers will get to understand how Merkel got to use the more familiar tone when addressing Former President Obama, identify strained moments in the relationship between Germany and the USA, and the strength of a friendship that crystallized the alliance between the two countries. Claudia Clark is a wonderful writer whose phraseology exhibits unique clarity; the prose is crisp and littered with terrific descriptions. From personal opinion to compelling and authoritative references, the author comes across as an expert in the subject, weaving details of the historical climate that witnessed Obama’s rise to power, the troubling economic recession, and the fractured relationship between the US and Europe. From discussing Angela Merkel’s difficult childhood behind the Iron Curtain and how she morphed into a brilliant Politian who eventually became the first East German Chancellor of a free and united Germany to effectively and intelligently capturing the rise of the first black American President, Clark maintains a powerful grip on the readers, thanks to the dazzling prose and her ability to entice readers with interesting details and fascinating political analysis. Dear Barack informs, entertains, and documents history.